The Astrology of Place by Madalyn Hillis-Dineen

(Download a printable version of this article as a PDF).

Locality astrology or astro-mapping, an astrological technique that seeks to discover the connection between geographical locations and planetary influences, is a uniquely 20th Century phenomenon.  After all, for ancient astrologers, the idea of moving more than several hundred miles from one’s birthplace was as inconceivable as the automobile, the jet plane or space travel.  At first, astro-maps were used for mundane astrology – the astrology of world events and the horoscopes of nations.  It was the exceptionally gifted astrologer, Jim Lewis, who popularized the technique by applying it to the charts of individuals.  Through his amazingly popular Astro*Carto*Graphy™ maps, Jim Lewis introduced a sophisticated astrological technique to the masses. Even a daytime soap opera character once went off to have her astro*carto*graphy map read to see if there was somewhere on earth where she could finally find true happiness.  Though enduring contentment is not ever likely to happen on a soap opera, many thousands of people consult locality astrologers each year to help them find a favorable place for romance, career, retirement or a pleasurable vacation.

While the actual idea of creating astro-maps is relatively new, the theory upon which the maps are based is really quite old.  Since time immemorial, astrologers have placed great significance on the rising and setting of the planets, believing that when planets are on these “angles,” their influence is most powerful.  In addition to the angles of rising and setting, astrologers also look at what planets may be culminating or at the highest point in the sky and its opposite point of anti-culmination.  The most easily understandable illustration is the movement of the Sun from sunrise (rising or ascending, representing the self) to high noon (culmination, signifying one’s highest aspirations or career) to sunset (setting or descending, corresponding to others) and, finally, to midnight (anti-culmination, symbolizing one’s home and roots).

In calculating a chart, the astrologer uses the date, time and place of birth to find out exactly what degrees of the zodiac were on these angles and examines the chart to find out if any planets are near those angles.  But, astro-mapping takes place out of the equation.  Here, lines are drawn on a map of the world showing exactly where, at that precise moment in time, the planets are on their four angles.  So, while the sun may be rising in , it is culminating in , setting in and at its lowest point or anti-culmination on the .

Lewis, as well as the handful of other astrologers to first use this technique, plotted the lines on the map by hand, a painstaking process to say the least.  Thanks to computer programs like Solar Maps, a map with such lines can be drawn in a matter of seconds, another reason why this technique came to popularity in our modern world.

Astro-locality astrologers also look at paran lines or crossings on the map. These are places where two planets are angular together, for instance, Mars is on the MC while Jupiter is rising. Parans are another technique used by our astrological ancestors that have become very accessible with modern technology. The word paran comes from the Greek word paranatellonta which means “rising together.”  Rob Hand in Essays on Astrology defines parans as “simultaneous transits over two or more bodies over the horizon or meridian circles of a given place at the same time.”  Hand defines 7 types of parans as follows:

2.     One rises while the other sets (oblique Ascendant opposition the oblique Descendant).

3.     One rises, the other culminates or anti-culminates (oblique Ascendant square right ascension).

5.     One body sets, the other culminates or anti-culminates (oblique Descendant square right ascension).

6.     Two bodies culminate or anti-culminate together (conjunct the right ascension).

Parans (except for types 2 and 7) are easily seen on the map as line crossings.  Except for types 6 and 7, parans are latitude specific.  Jim Lewis believed that places along the latitude, regardless of longitude, would all be sensitive to the energies of the planets that comprise that particular paran.  This is because as the earth revolves over the course of the day, the paran will occur at some point at each place along that latitude line. Every place along that latitude is sensitized to the energies of the planets involved even though the crossing occurs in only one place.

John F. Kennedy’s astro-mapping is a fascinating example of the power of astro-locality technqiues.  Let’s look at one of the very first places in the world that brought Kennedy to fame – the location in the South Pacific where the patrol torpedo boat he commanded, the PT-109, sank during World War II.  A few of the crew members perished and Kennedy, who sustained a chronic back injury, managed to save the life of one of his crew members, towing the man several miles to shore by holding the strap of the fellow’s life jacket in his teeth. 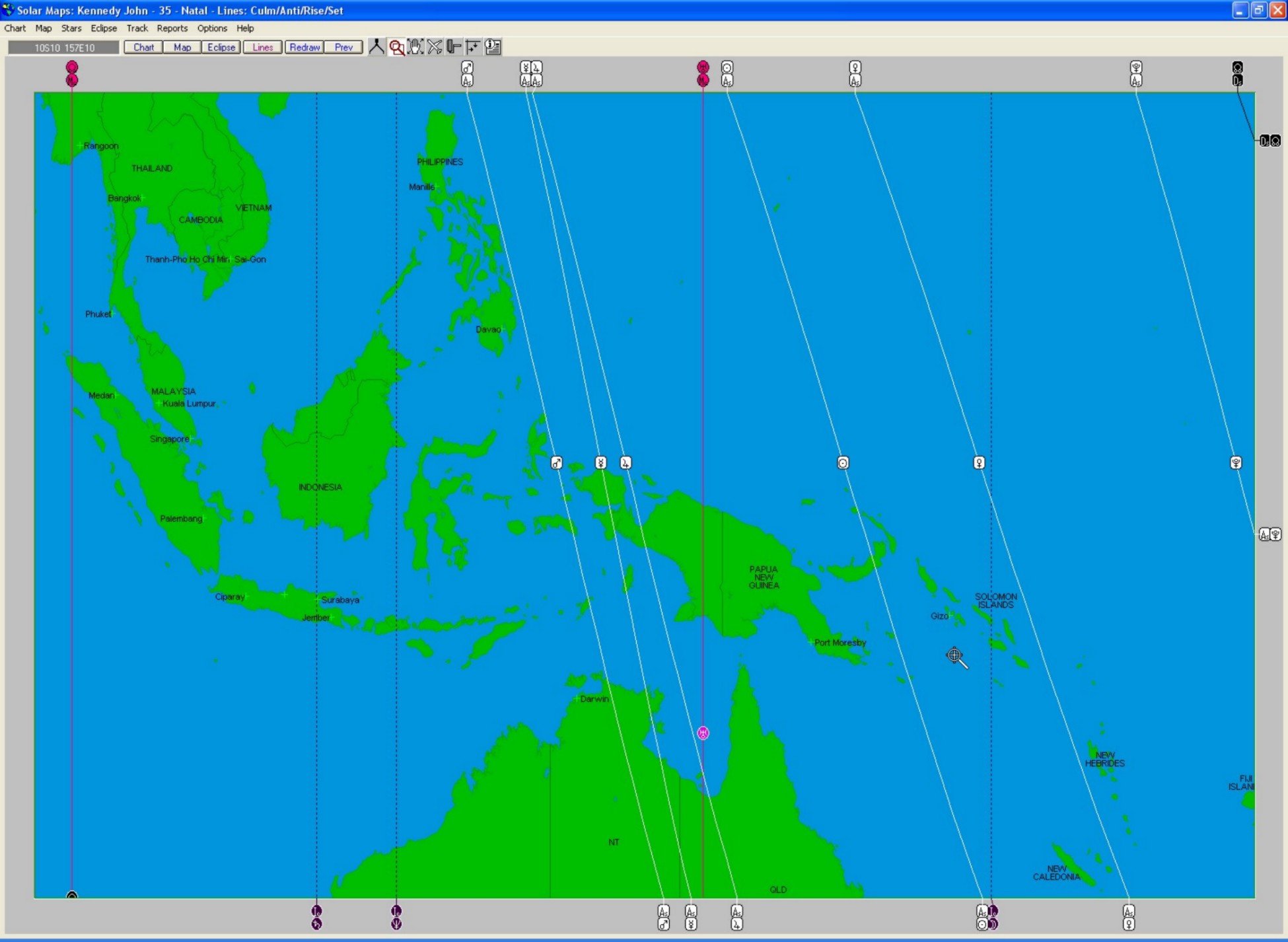 The location of this event, quite close to , is under the influence of three planetary lines: the Sun and Venus rising line, and the Moon at anti-culmination.  The Sun represents the hero in us all and places where the Sun rises afford an opportunity to shine.  Certainly, Kennedy acted bravely and the situation truly brought out the best in him.  Since the Sun rules the 11th house in Kennedy’s natal chart, it makes sense that he would risk life and limb for his comrades. And, with Venus rising nearby as well, the incident ultimately buoyed Kennedy’s popularity with the electorate that would soon send him to the House, Senate and the Presidency. Interestingly, And, with Moon (ruler of the natal 10th house) at anti-culmination, representing one’s nurturing and traditions, it is likely that Kennedy’s upbringing played a part in the extraordinary effort Kennedy made to save his shipmate. Interestingly enough, Kennedy gained even more fame as a result of the incident.  While he was recuperating from back surgery necessitated by the injuries he sustained on PT-109, he penned the 1957 Pulitzer Prize winning Profiles in Courage, a book about two Senators who risked their careers to do what they believed to be right.

Though he was only President for 1,000 days, there are certain places in the world that are forever identified with Kennedy.  One is , where Kennedy showed solidarity with the citizens of that city that found themselves divided by the wall, when he uttered the famous words, “Ich bin ein Berliner.”  While the Cold War sizzled, Kennedy’s Venus setting line in insured that he would be much loved by the people of .  Three paran or crossing lines are within a 15 minute orb of ’s latitude as well: Venus/Uranus, Sun/Neptune and Mars/Node. These planetary energies are indicative of sudden popularity, an idealistic vision and a call to work together.

Kennedy’s Sun and Venus set lines are about 260 miles west and east of respectively with their midpoint passing exactly through the city. Kennedy famously quipped that he was the man who accompanied Jacqueline Kennedy to .

Mars, the planet of war, is at its low point in , seat of Nikita Kruschev’s Russian government.  With this placement, Kennedy saw and communism as a threat to his heritage as an American.  After all, Kruschev did vow to “bury” democracy.  But, it would be in , where the real battle between Kennedy and Kruschev would be fought during the Cuban missile crisis.  Here, we find the Moon’s South Node, a point of karma culminating, suggesting that Kennedy’s Presidency would be inextricably connected to this place.  In addition, Saturn, the planet of leadership and discipline, is also culminating nearby, indicating that he could draw upon Saturn’s gifts of discipline and authority.  Certainly, Kennedy’s diplomatic and cool-headed handling of the crisis averted what could have easily become a third World War and, at the same time, he safeguarded the Western hemisphere from the constant threat of Soviet attack.

Kennedy’s quest for the Presidency began with his winning the Democratic nomination in , a location along his Sun culmination line.  Here, the hero achieves his career aspirations and, in Kennedy’s case, he also realizes the goals that his father, also represented by the Sun, had set for him.  But, perhaps there is no place more associated with John Kennedy than , the city where he was assassinated, which is in orb of the line where Pluto, the planet of power, transformation and death, culminates. ’ latitude is also in orb of the parans of Mars/Neptune and Sun/Uranus.  Kennedy’s death not only ended his Presidency but it also began his legacy as the much-loved, martyred President.

All illustrations are from Solar Maps, version 3, available from Astrolabe through 4/30/07.

(Download a printable version of this article as a PDF).

For more details or to purchase Solar Maps, click here.